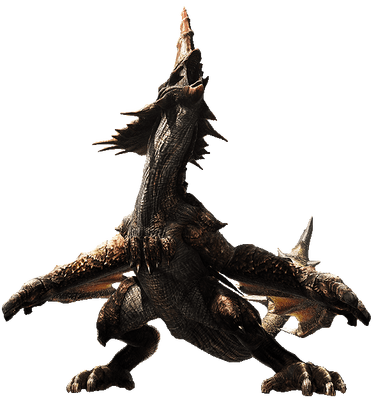 They have a brown, rock-hard texture to their shell. There is a subspecies of Monoblos known as the White Monoblos. These are generally larger in size than their sand colored counterparts and seen as more dangerous by hunters. Ironically, whilst their ear splitting roar is the bane of hunters, they are weak to Sonic Bombs while digging through the ground and not in Rage Mode.

The Daimyo Hermitaur uses a Monoblos skull to protect its vulnerable back when it matures into a fully grown creature. The Plum subspecies uses a Diablos skull for the same purpose.

While they have no breath attack, their roar is considered a lethal weapon itself. They are also very physically capable, able to fight off hunters with horn-thrusts and tail-swings. Being able to tunnel beneath the sands of the Desert also means they can sneak up on any potential threats.

Monoblos are aggressive, and will attack Hunters on sight. When suitably enraged their crown will become inflamed with red streaks. They are quick to anger, and will move faster and hit harder while enraged.

Monoblos have only been spotted in the Desert, Old Desert, and Dunes regions. They have also been seen inhabiting the arid areas of the Everwood.

In Monster Hunter Frontier 10.0, HC Monoblos was released. Its attack power and speed are increased; its digging attack is much faster; it can perform a ground-slam immediately followed by a powerful horn thrust; and finally, it can perform a tail whip whilst sliding forwards.

HC Monoblos' horn appears longer and its body and tail are more spiky.

A Variant of Monoblos that appears in Monster Hunter Online.

Retrieved from "https://monsterhunter.fandom.com/wiki/Monoblos?oldid=818442"
Community content is available under CC-BY-SA unless otherwise noted.