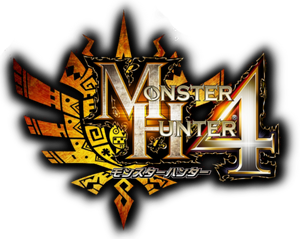 Monster Hunter 4 is the latest release in the Monster Hunter series, developed by Capcom. It is the second game in the aforementioned series to be released on the Nintendo 3DS. Many updates and improvements have been made that set this sequel apart. There is a stronger emphasis on platforming than previously; walls can now be climbed more fluidly and in any direction, and for the first time Hunters can grab onto monsters and attack them. Environment are larger and occupy more vertical space, and the Frenzy Virus mechanic makes many monsters more fearsome than ever. Various monsters from previous games return, most notably Rathalos, Rathian, Tigrex and Yian Kut-Ku - for a full list see MH4: Monsters. Two new weapon classes, the Insect Glaive and Charge Blade, are also introduced in this game.

In an interview, it was stated that Capcom intended to put far more effort into adventure and storyline, and there will be a group of traveling caravans. Underwater battling will not be present, however.

New monsters include a mysterious black dragon named Gore Magala and an orange lemur-like Pelagus known as Kecha Wacha. In the TGS trailer, three new monsters were revealed. Nerscylla, who uses webbing to cocoon the hunter,Tetsucabra, a large frog-like creature with huge tusks that dwells in moist areas, and a large Jhen Mohran-like beast known as Dah'ren Mohran that inhabits the Great Desert. The February 2013 trailer also showcased a new armored snake-like monster known as Najarala that seems to dwell in forests and a new giant serpentine-like monster that is similar to Laviente that will appear in this game, as seen in the third trailer.The Kushala Daora returns in this game along with Teostra. In another promotional video it was revealed that the Zinogre will be returning, along with Kirin.

Two new Weapon Classes are introduced in this game, one of them being the Insect Glaive. This double-ended staff is capable of quick fluid attacks like the Long Sword, but it also is capable of summoning a large Neopteron that will drain energy from monsters to boost the Hunter (in terms of attack, health, speed or defense) and propelling the hunter into the air in a polearm fashion.

The second new weapon type is the Charge Blade, capable of transitioning between two different forms. Seemingly, it can be used as a large-scale Sword and Shield, or the blade and shield can be combined to form one large cutting weapon. It also appears to utilize different coatings and charged attacks.

Your hunting journey begins in a market town, known as Val Habar, where many travelers and their caravans get together to sell goods and gather information. Val Habar is also where you'll meet the leader, who will recruit you as a part of his caravan troupe and provide hunters with an Insect Glaive as the hunter's very first weapon. Aside from the leader, the caravan crew consists of his assistants, who acts as the quest receptionist; a traveling merchant; a blacksmith with his apprentice daughter; and finally a cooking Felyne. They'll help you every step of the way with their specialized skills, as you travel from land to land.

The second village is called Harth, which is an underground village populated by a tribe of mole-like people. Its volcanic surroundings make an ideal place for blacksmiths to create their finest work.

There will be several villages other than the two revealed so far, which players will be able to visit upon completing certain quests and advancing in the game. These villages will have their own unique looks and characters.

Every new destination also means more unlocked features from the rest of your caravan members. Additionally, players will freely be able to return to any previous villages at any given time in the game.

The release of Monster Hunter 4 was delayed. The reason to postpone the release was made on the basis that further quality enhancements would be needed to meet fan expectations. Monster Hunter 4 eventually released in Japan on September 14, 2013.

On the May 30th 2013, two Special Edition Nintendo 3DS LL's were announced to be released alongside Monster Hunter 4 in Japan. Their names are the "Gore Magala Black Version" and the "Airou White Version" On the June 3rd 2013, Capcom announced different editions for their game, exclusive to the E-Capcom store. The "complete set" includes a strap, a figure, a pouch and the game.

On February 13th, 2014, a new Special Edition Nintendo 3DS LL was announced featuring Golden Rajang which would be released for sale on March 27, 2014. http://www.nintendo.co.jp/3ds/hardware/pack/rajang_gold/index.html

The Axe Mode of the Charge Blade

The Sword Mode of the Charge Blade

Hunter's home as depicted in the game