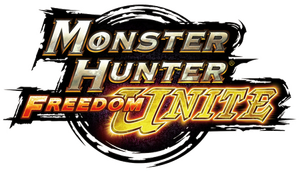 Sword and Shield, Dual Blades, Great Sword, Long Sword, Hammer,
Hunting Horn, Lance, Gunlance, Light Bowgun, Heavy Bowgun, Bow
Monster Hunter Freedom Unite is the western release of Monster Hunter Portable 2nd G. It was released across America on June 22, 2009, Australia on the 25th of June, and Europe on the 26th of June. With over 500 hours of gameplay and previously unreleased monsters, weapons and missions, Monster Hunter Freedom Unite was the biggest game of the series for its time. Via Ad-Hoc functionality, players can experience the social gaming phenomenon that’s gripping Japan and adventure with up to four friends for a thrilling and savaging multiplayer hunting party. From devising the strategy to executing the attack, team play with your friends is the key to hunting down the ferocious beasts.

Monster Hunter Freedom Unite is available on the PS Store for the Vita. It has improved graphics and the second analog stick is now usable. The game is currently only in Download form. Nothing has changed with the game contents.

On 14 February up to March 26 of 2008 in Japan, Capcom had a promotion campaign with Pizza Hut for Monster Hunter Portable 2nd G.[1]
Ordering a Pizza from the Japanese Pizza Hut website will net a buyer the following prizes: 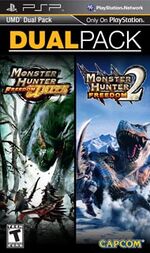