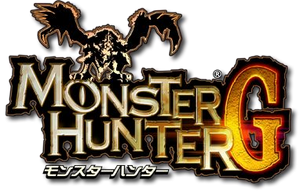 Sword and Shield, Dual Sword, Great Sword, Hammer,
Lance, Light Bowgun, Heavy Bowgun
Monster Hunter G is a Japan-exclusive game for PlayStation 2. It is an expansion to the original Monster Hunter with more quests, weaponry, and Subspecies of its existing monsters. Due to the series lack of popularity overseas, this PS2 title never made it outside of Japan. In 2006, however, Monster Hunter Freedom was released for the PSP, which is based on the content of MHG, albeit with several differences.