"Monster Hunter Stories: Ride On" Based on Capcom's hit franchise, Monster Hunter, an exciting new anime comes from the creative minds behind Jojo’s Bizarre Adventure. In a world where people and monsters are at odds, some learn to coexist. Known as Riders, they awaken the powers of monsters and live alongside them in secrecy. Now, one young boy journeys to find his own companion and become the world’s greatest Rider. 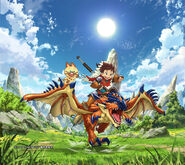 Add a photo to this gallery
Retrieved from "https://monsterhunter.fandom.com/wiki/Monster_Hunter_Stories:_Ride_On?oldid=818350"
Community content is available under CC-BY-SA unless otherwise noted.