Najarala [1] is a Snake Wyvern introduced in Monster Hunter 4. 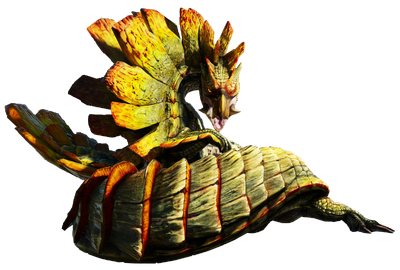 Najarala is a large Snake Wyvern with bright green skin adorned with large orange-yellow plates on its back and tail. It has a long serpentine body with small though fully functional fore- and hindlimbs that aid it in moving around on uneven ground. Najarala also has a large beak-like mouth similar to that of a parrot, along with a small pair of tusks.

Najarala is capable of burrowing underground and attacking unsuspecting enemies or prey from below. Its fangs can deliver a potent paralyzing venom in order to subdue its opponents if they were to attempt escape from its circling trap attack. The tail plates can be flung at enemies to create a deafening noise, and they can be made to shatter into many pieces through powerful vibrations generated by the plating around Najarala's body. These shards will always cause the Stun status, unless an appropriate armor skill grants protection against it. It may also constrict its target with its long and large body, causing damage over time until the victim manages to break free.

It is an aggressive ambush predator that will strike when prey is in reach. Najarala will also utilize the misty fog in its environment to launch ambush attacks on unsuspecting hunters or prey.

Najarala is mostly seen inhabiting the Primal Forest and the Everwood, where many types of prey are accessible.

The Japanese name Gararaajara is based on the Japanese word for "snake", as well as an onomatopoeia for rattling. The English name Najarala is a combination of "Naja", a genus of cobras, and the rattling sound a rattlesnake produces.

Retrieved from "https://monsterhunter.fandom.com/wiki/Najarala?oldid=800696"
Community content is available under CC-BY-SA unless otherwise noted.