View source
watch 01:28
Who is Nargacuga?
Do you like this video?
Play Sound

It has black scales, black fur and nightmarish red eyes, giving it the look and style of a predatory black panther. Its dark, feral appearance suggests that it may mainly be a nocturnal predator. This wyvern has been sighted within the Great Forest at both night and daytime, the Jungle, and also the Old Swamp. When it's in Rage Mode, its eyes glow bright red and leave a trail of reddish lines when Nargacuga moves. Also, its tail erects large spikes which can be flung and linked up with its attacks for devastating hits. Their vertebrae and tail muscles are extremely flexible, making the tail of Nargacuga also prehensile. Its tail is also its most powerful weapon. The scales at the end of the tail can also be shaken to produce rattling sounds similar to that of a rattlesnake.

Like Yian Kut-Ku, they are surprised by the shock of sound (Sonic Bombs, Barrel Bombs, etc.) which will make them enter rage mode as soon as they recover.

Nargacuga has the ability to attack with almost every part of its body, mainly its bladed wings and its spiked tail. Its head can be used for biting, similar to Tigrex. Its bladed wings are used almost for the entire battle and deal high damage. Its tail tip, which can be cut with a white bar of sharpness or above, is extremely dangerous. When in Rage Mode its tail spikes will protrude until it gets out of it (Although they will protrude when it uses tail slams and it shoots tail spikes). Nargacuga also has extremely strong muscles that let it jump long distances and tall heights at high speed.

Nargacuga is a careful and cautious monster. It is very easy for it to sneak up to a hunter. Nargacuga lives in dark places that it has adapted to. It rests on high trees that are hard to reach, or maybe can't be reached, so hunters can't catch it by surprise for capturing it. Nargacuga will wake up when hunters are right in front of the tree due to its natural senses.

A Deviant of Nargacuga first appearing in Monster Hunter Generations. 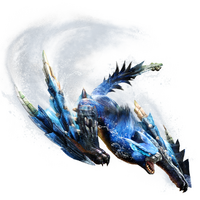