View source
watch 02:59
Wiki Targeted (Games)
Do you like this video?
Play Sound

Navirou (Japanese ナビルー) is a young Felyne with an unknown past due to his amnesia who becomes the Player characters traveling companion. In the game sequel, he becomes the Felyne companion/guide of the sequel's protagonist.

Navirou is a cheery and funny Felyne that loves to eat Well-Done Steaks and donuts. He can easily be scared by things like Deviljho or Nargacuga, though tries to keep his brave attitude through it all.

In the anime, he also displayed a haughty personality. Two running gags are that he would cross his arms in a X when something doesn't go his way, and say "Navi-rule" with a strange pose whenever he or someone else makes remarks on his ideas or plans.

Not much is originally known about Navirou's past due to his amnesia. He awoke on the shores of Koapni Village, a village of Felyne, where he was taken care of by the resident Felyne and their caretaker, Chief Mallerie. He soon befriended and became particularly close to a female Felyne named Pansy. However, due to the trouble he thought he was bringing to her and the village, he decided to leave on a journey. His travels would eventually bring him to Hakum Village where he meets the Player Character.

It's revealed that Navirou use to be a normal Felyne until he, along with many others, were kidnapped by the mad scientist Doctor Manelger who experimented on him. The constant modifications led to his current appearance and the ability to transform into a Felyne that can use the Thunder Element. It was there he befriended the Numbers, Felynes modified like him and became part of their group as Number 5. Initially, with the Number's help, he was planning to escape with them and the other imprisoned Felynes but the trauma of the events made him the only one to escape and lose his memories.

Navirou looks quite different from other Felyne. He has a chubby body, a giant head, a bushy squirrel-like tail, and a strange mark on his right wrist. 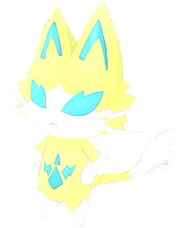 Navirou can change into a Felyne with yellow spiky fur, jagged blue eyes, and the paw print on his belly also becomes blue and jagged. This form allows him to use electrical based attacks. He seems to only take on this form when his friends are in danger.