Neko (Means Cat) (Japanese 剣ニャン丸) is a trader that travels the world with his master, the Argosy Captain. 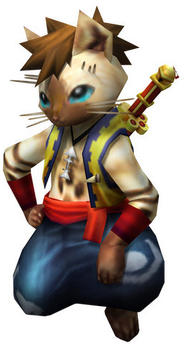 Neko is an adventurous businessmen that is full of himself in many ways.

Neko has brown hair on his head and wears a yellow vest with indigo pants. He is known to carry a small sword on his back.

Retrieved from "https://monsterhunter.fandom.com/wiki/Neko_(Means_Cat)?oldid=749167"
Community content is available under CC-BY-SA unless otherwise noted.