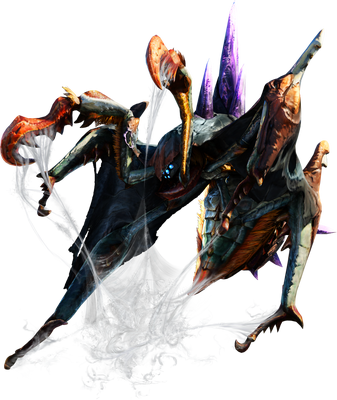 Nerscylla physically resembles a real life Arachnid, but is much larger in size. Its long, strong legs allow it to move at fast speeds, even sideways. At the tip of its abdomen is a large stinger it may use to attack. Sharp, poisonous spikes protrude from its back.

Nerscylla is armed with four powerful legs and two claws, each one tipped with a formidable barbed hook, used for holding prey as well as keeping its grip while scaling walls. In addition, it possesses a massive pair of retractable jaws which can inflict a poisonous bite. It can produce a strong, sticky webbing that it uses to trap prey and build nests.

Nerscylla is adaptable to different environments and capable of spinning a large amount of silk web very quickly. The silk it uses to swing itself across the air and to capture prey is very durable and sticky, so breaking free is difficult. Nerscylla ensnares its prey with the web, then reels them in to strike. The stinger at the tip of its abdomen contains a tranquilizing fluid that can cause the Sleep status. In higher ranks, Nerscylla loses the ability to sleep prey and hunters, but gains the Deadly Poison status instead.

Nerscylla weave nests of durable web in the Sunken Hollow. When they abandon their nest, they can be seen wandering in other areas such as the Primal Forest and the Everwood. They are also known to nest near farming land, where livestock are found, and prey on them with the occasional and unfortunate farmer.

The Japanese name Nerusukyura is a combination of "Nergal", the Mesopotamian god of plague and war, and Neoscona scylla, the scientific name of an orb-weaving spider. The English name Nerscylla is a basic romanization of the original Japanese name.

Retrieved from "https://monsterhunter.fandom.com/wiki/Nerscylla?oldid=843967"
Community content is available under CC-BY-SA unless otherwise noted.