Noios is a Wingdrake first introduced in Monster Hunter: World. These Wingdrakes will produce a sound similar to screamer pods when startled. Use meat to get their attention and then hunt them for materials, or use them as transportation. They can be found in the Wildspire Waste.

Noios are wingdrakes that resemble vultures in addition to pterosaurs. They have a large beak, a waddle hanging from their neck, light-brown skin, and a long tail.

They can often be seen flying around the wildspires seen in the wastes. When easily startled, they can let out a harsh cry which can startle those near and lead to a chain reaction. Noios are able to mimic the roar of Diablos. This allows them to call for Diablos when they feel threatened.[1] They can be lured down to the ground using raw meat, where they can be killed and carved for materials. 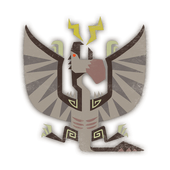