Pariapuria is a Flying Wyvern that was introduced in Monster Hunter Frontier Season 5.0.

Pariapuria is a quadrupedal, amphibious Flying Wyvern. It is big, gluttonous, and disgusting in its behavior. Its head is flat with six red fins, with a long blue tongue inside a big mouth. Its body is mostly colored dark brown, with a milk white hide on its belly. Its back is shaped similarly to a Tigrex, only with two fins protruding out. Its front legs have three claws and a phalanx, which feature three spikes that are orange at the tip. It has colorful wing membranes, in a sort of gradient consisting of black, blue, orange, and yellow. It has four claws on its hind feet. Its tail is long and thick, with a white membrane stemming from the side of its tail. Although it is a Flying Wyvern, Pariapuria shares some physical resemblance to a Leviathan, due to its habitat and fins.

Pariapuria has the ability to inflict the Soiled status, and by spitting dirt at opponents it can instantly stun them. It can also throw boulders and charge in a similar manner to Tigrex (Just like Tigrex, it can get its head stuck in a wall), Pariapuria has other attacks such as a slam attack and it will even use its own vomit as a weapon. Though slower than other Flying Wyverns of its type they make up for it with their heavy hitting blows.

Pariapuria is a glutton, constantly eating anything around it. Eating too much makes it vomit. It borrows some attacks from Tigrex, including the boulder throw and charges. However, Pariapuria's signature ability is regurgitating the food it ate. When this is done sometimes pieces of its insides are also released which hunters may gather for extra rewards. Pariapuria also one of the monsters that will eat any kind of meat.

It has the unique behavior of being able to be fed by hunters in the form of placing meat and letting it try to charge at them. Its drool color will indicate what type of meat it is hungry for. Giving it the wrong type of meat when it eats will make it pause and smash the ground causing a quake followed by violent thrashing around, as if its having a fit. Once Pariapuria is full, it will walk around moaning with a bulged belly, ignoring the hunters until it digests. Attacking and making it flinch in this state will infuriate it and unable to digest. Instead, it will use the contents of its stomach as a weapon.

Another unusual aspect of Pariapuria is that it does not get enraged.

Pariapuria is mainly found in the Gorge, Highland, and the Tide Island. 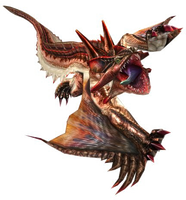 It is first able to be hunted at SR31+

HC Pariapuria hasn't had much of a physical change, but he is quite different in color. Its ears, fins, back spikes and protrusions from the sides of its jaw are now red. Its eyes are a more bright yellow and its claws are pink. Its mouth is a unusual blue and its tongue seems to be more bright in color.

Behavioral changes include less charging, which makes it more difficult to trick into eating meat, and vomit attacks without the usual prerequisite of being overfed. It also tends to be more aggressive.

HC Pariapuria also has a few new attacks. One of these is an attack that acts as a sort of vortex, pulling in hunters similar to that of Amatsu's tornado attack. Shortly after, Pariapuria spits large projectiles of vomit that cause Soiled, as well as a state in which the afflicted hunters walk around as if drunk. The second attack also uses suction, where Pariapuria turns head left and right in an attempt to catch multiple hunters. The third attack has it stuff rocks in its mouth, then spitting them all forward. It hits multiple times and causes KO.

Regardless of these new additions, HC Pariapuria is considered a weakling for its rank. 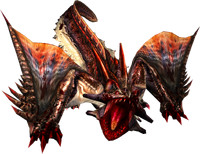 Supremacy Pariapuria is able to be hunted at SR300.

Supremacy Pariapuria's appearance has changed considerably; it has a glowing red eye trail similar to an enraged Nargacuga's, a mouth slathered in what could very well be blood, and scars all over its body. Bloodstains cover its body, most notably on its front claws. It also has tinges of purple on various places of its body.

It is much faster and stronger than HC Pariapuria. The Guts skill is highly recommended for fighting this monster.

New attacks include a very fast, mouth-first charge. Its rock spit move now has it rain down even more rocks, its vomit also mixed in. This causes KO and Soiled statuses. It also coats Pariapuria, enabling it to cause Poison, Paralysis, or Sleep, if it bumps into a hunter. It will also make use of the original Pariapuria's jumping attack after a backhop. When it is near death, it will coat itself in a red liquid, increasing its strength.

It also has double slide side bites that drop rocks out of his mouth to his left and right causing KO following by a super high speed charge destroying the ground and if it hits a wall will cause more cave in rocks from the roof to fall that cause KO, a sickly green slightly slow sweeping wide barf beam that causes soiled and drunken like walking, sucking in all hunters in the area underneath it followed by jumping into the air spitting a giant ball of green slime that causes soiled and drunken like walking beneath it, then gliding away, jumping into the air causing Dragon strength wind as it jumps knocking victims over then slamming down on them with incredible force and a near death flying attack surprising many that it can actually lift off the ground, though it appears to be struggling, then landing on a targeted player no matter how far away they ar,e it will instantly fly crash at amazing speed across the whole room with incredible force.

Despite these, many hunters still face this monster repeatedly due to the great value of its materials for upgrading equipment.

Pariapuria is a glutton, eating any placed meat at any time of battle. Some items, such as Acid, can only be carved from Pariapuria's vomit. The main problem with this is getting it to vomit without unwanted effects from eating too many meats of the same kind. Pariapuria will attack violently if it eats the wrong kind of meat. To determine what is the right kind of meat, one must check Pariapuria's saliva color, and place the meat with the same color as the saliva (e.g., if its saliva is purple, poisoned meat should be placed). If it eats enough meat, it will walk around bloated, ignoring its attackers (similar to a calm Espinas), making it possible for the hunter to attack without the worry of getting hit. Because of this, Pariapuria can be easy to hunt if fed the right kind of meat.