watch 01:17
'Monster Hunter' Lore: Pink Rathian
Do you like this video?

Pink Rathian are Flying Wyverns and a Subspecies of Rathian, introduced in Monster Hunter G.

Pink Rathian has a more heavily-armored body and has greater health and attack power than her green relative. She can often be found in various quests alongside her gender counterpart, the Azure Rathalos.

Her attacks are generally stronger than those of normal Rathian, they are also much faster than its green relative, but that aside the two are identical in many ways. 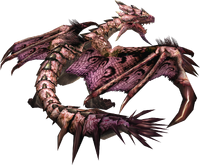 HC Pink Rathian has a more purple color to certain parts of its body and more spikes on its tail. It has new behavior and attacks including a fire ball so large and strong it creates an explosion larger than the creature itself, and has a tail swing that instead of turning its body, it waves its tail around behind it poisoning anyone it hits. In G-rank, it gains a new attack in which it lifts a large boulder from the ground, then destroys it with its talons, sending chunks of rock in multiple directions in the process. It will also shoot spikes from its tail whenever it does its tail spin attack.

Retrieved from "https://monsterhunter.fandom.com/wiki/Pink_Rathian?oldid=849924"
Community content is available under CC-BY-SA unless otherwise noted.