Pink Rathian are Flying Wyverns that appear in Monster Hunter: World. This Subspecies of Rathian is noted for its vibrant pink scales. Pink Rathians wield their toxic tails more deftly than normal Rathians, weakening prey with poison before moving in for the kill. They can be found in the Coral Highlands. Their materials can be used to craft Poison-element weapons and the Rath Heart Armor Sets.

Due to the hardships brought on by their strange coloring, Pink Rathians have become very aggressive wyverns, fighting to kill anything that stands before it. When angered, they will try to use their devastating fireball attacks. They do more backflips and tail whips and fewer charges than the normal variation, so hunters should be cautious when fighting one.

Pink Rathians develop shells across various areas of their bodies, especially on their tails. Aim for the soft tip of the tail when attempting to sever their tails. Their armor is much tougher in certain areas. The back, neck and first half of the tail of these wyverns require the highest weapon sharpness to penetrate it.

The Pink Rathian tail flip is tilted slightly to the left compared to normal Rathians, making the attack harder to avoid. They tend to perform the tail flips at a greater frequency and will often chain several of them together while attacking prey.

These wyverns have the ability to follow up their short range bites with a lunging forward second bite. They cannot use this second bite while exhausted.

Pink Rathian is the target of the following quests:

The following is a complete weapon list for Pink Rathian weapons: 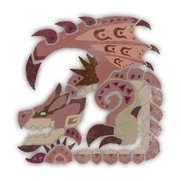 With Legiana
Add a photo to this gallery
Retrieved from "https://monsterhunter.fandom.com/wiki/Pink_Rathian/Monster_Hunter_World?oldid=778899"
Community content is available under CC-BY-SA unless otherwise noted.