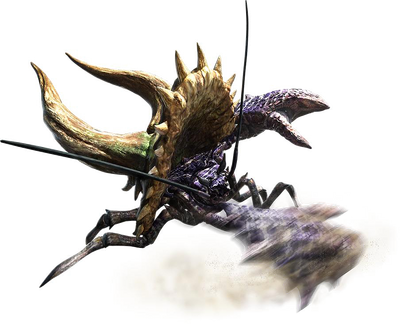 Unlike the common Daimyo Hermitaur, this subspecies sports a purple and white carapace, and wears a Diablos skullshell instead of a Monoblos skullshell. Unlike its red counterpart, the Plum Daimyo Hermitaur is weak against Ice, rather than Thunder. The horns on its shell can be broken, just like those of a Diablos.

Much like its cousin, the Plum Daimyo Hermitaur is docile until provoked or aggravated. Its territory is expansive and thus impossible for it to defend, leading it to be something of a nomad, wandering from place to place in search of food.

The Plum Daimyo Hermitaur lives in similar environments to its red cousin, in both Desert and Jungle regions.

Retrieved from "https://monsterhunter.fandom.com/wiki/Plum_Daimyo_Hermitaur?oldid=849942"
Community content is available under CC-BY-SA unless otherwise noted.