Her early life is mostly unknown, unlike her brother, Treshi. Though she is unknown, her ancestors are known for using a giant sword to defeat two powerful gods, the Black God and the White God. However, she and her brother are known for searching for this giant blade until they discovered it. This led to them making and settling in Pokke Village.

Pokke Chief wears a special version of the coats made within Pokke Village. 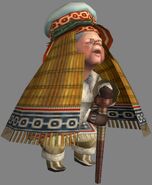 MH2 Render
Add a photo to this gallery

Retrieved from "https://monsterhunter.fandom.com/wiki/Pokke_Chief?oldid=849236"
Community content is available under CC-BY-SA unless otherwise noted.