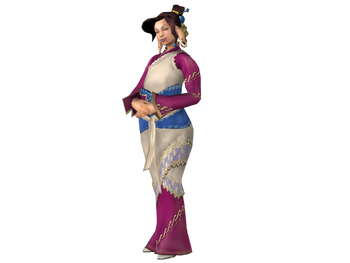 She is considered to be a luck-pusher and a coward by many who have worked with her in a crisis.

Not much is really known about her past, however, she is known to volunteer strong hunters to deal with certain monsters like Akantor or Ukanlos in order to deal with a potential problem that could destroy the village. Though she will freely volunteer hunters to handle dangerous situations, the Pokke Manager refuses to stay behind at her post and, potentially, die with her village. She has also failed getting villagers to evacuate in bad situations like when a Ukanlos was getting closer to Pokke Village, even with orders from the Hunter's Guild.

The Pokke Manager wears a long white dress with bits of purple covering portions of it.

Retrieved from "https://monsterhunter.fandom.com/wiki/Pokke_Manager?oldid=749169"
Community content is available under CC-BY-SA unless otherwise noted.