The following are the available Poogie Costumes (プーギーの服) in the game:

The following Poogie Costumes are available in Monster Hunter 4 Ultimate:

To obtain a Poogie in Frontier, hunters must at least have 30 points obtained from the Park. The Poogie would be present in the hunter's farm. Another 30 points is needed for it to have a trampoline so it can go with the hunter on Quests. Poogies give items to the hunter in-quest.

The following are the available Poogie Costumes (マイトレプーギー服) in the game: 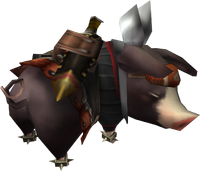 Legendary Poogie (レジェンドプーギー) is owned by the Legendary Rastas a hunter can hire after purchasing the Assist Course (アシストコース). Prior to Monster Hunter Frontier G3.2, before Partners were introduced, the Legendary Poogie was the only means of obtaining additional items in the rewards screen after a quest had been cleared.

Notable about the Legendary Poogie is his unique clothing and ability to drop Max Potions mid-quest, as well as getting you extra monster and gathering items in an additional reward screen. They are mostly praised for their ability to obtain even HC-carves.

Poogie is available as a companion in PlayStation Home when setting up a PSP Ad-Hoc Party game in Monster Hunter Portable. This is only available in Japan.

Poogie can be obtained as a Minion in Final Fantasy XIV.