Purple Gypceros is a Bird Wyvern and a Subspecies of Gypceros introduced in Monster Hunter Freedom. 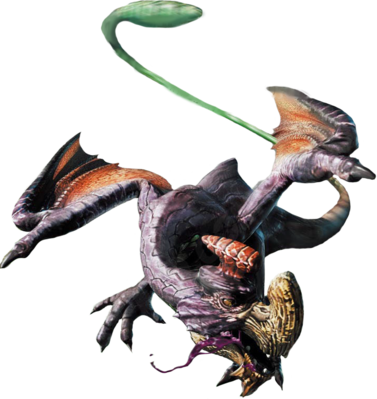 Whilst the common Gypceros' colors are blue and pink, the Purple Gypceros' are a more vivid purple and green.

This Subspecies is notably more resiliant than its original counterpart, and can produce more powerful poison.

Purple Gypceros is known to use its flashing attack more frequently in battle, and will chain other attacks directly into it.

Purple Gypceros are usually found in swamps and marshlands, although can occasionally be seen in Jungle. Being omnivorous, they prefer warm and humid locations where insects and mushrooms are plentiful and water is abundant.

HC Purple Gypceros has enlarged talons and wing claws, as well as larger teeth and a more pointed crystal-organ on its head. Its wings also have a more vibrant, pinkish coloration.
In terms of new attacks, HC Purple Gypceros can spit three large poison balls in a triangle formation; fly quickly into the air and slam down, before immediately following up with a flash; lunge forward and spin around rapidly, striking out with its body and extendable tail.

For details on older games this monster has appeared in, see Purple Gypceros Guides.

Retrieved from "https://monsterhunter.fandom.com/wiki/Purple_Gypceros?oldid=800628"
Community content is available under CC-BY-SA unless otherwise noted.