Purple Ludroth is a Leviathan and a Subspecies of Royal Ludroth introduced in Monster Hunter Portable 3rd. 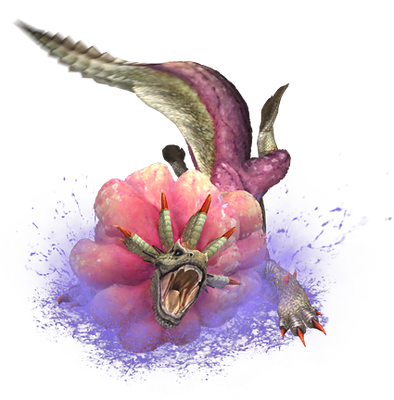 The purple coloring is due to the large amounts of toxins stored in its body. It has pale, grey skin and bright orange claws and spikes.

A large quantity of poison is stored in its large purple mane like a sponge. The Purple Ludroth can spit balls of poison mucus out of its mouth. It also releases a splash of poison from its mane by slamming into the ground.

The Purple Ludroth generally lives a solitary life free of any following of males or females. Unlike the common species, it is not known to spend time in the water.

This subspecies inhabits similar environments to the common species, but as it does not spend any time in large bodies of water, it is willing to travel further inland, and thus it can also be found in the Misty Peaks.

Retrieved from "https://monsterhunter.fandom.com/wiki/Purple_Ludroth?oldid=812524"
Community content is available under CC-BY-SA unless otherwise noted.