Qurupeco is a Bird Wyvern introduced in Monster Hunter 3. 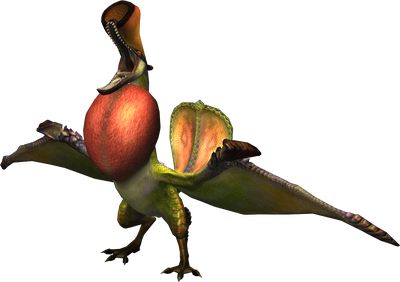 The Qurupeco resembles a large bird with Pterosaur-like features, such as a fanged beak and leathery wings. It is mainly lime green with some scales being tinted yellow, it also has a clump of iridescent purple feathers on its back between its shoulders. The Qurupeco has a short, stubby brown crest extending from the back of its head. The Qurupeco's soft crest stretches over the top of its head and when calling opens out into the shape of a megaphone, amplifying its calls. Its most notable feature however is its bright red vocal sac which inflates when calling.

The Qurupeco also has a pair of thick, bulky growths on its wings which produce sparks when struck against each other, much like flints. It uses these to ignite its mucus, causing fiery explosions. Its tail is shaped like a fan and can unfold revealing brightly colored skin, most likely as a warning for any would-be attacker.

The Qurupeco's feet seem to have only 3 frontal digits on each foot. It may also have a back digit, but its stubby appearance makes it looks more like a heel. Its feet are also partially webbed.

It uses its masterful vocal mimicry abilities to summon aid from various monsters, as well as healing them and boosting their abilities. The Qurupeco's soft crest and throat sac make it a very delicate monster.

Qurupeco's beak and flint-like wingtips can be broken for additional rewards at the end of a quest, such as Strange Beak and Flintstone, respectively.

When its vocal sac is inflated, it is susceptible to loud noises, much like the Yian Kut-Ku. This makes Sonic Bombs or objects that cause explosions effective at stopping some of its abilities, leaving the interrupted Qurupeco disoriented for a moment and causing it to drop an item.

The Qurupeco is capable of flight, and will both fly around the battleground and to other areas. This also means that traps cannot be set up with the intention of trapping it while it flees.

Retrieved from "https://monsterhunter.fandom.com/wiki/Qurupeco?oldid=818414"
Community content is available under CC-BY-SA unless otherwise noted.