Second
Rajang is a Fanged Beast introduced in Monster Hunter 2.

Rajang strongly resembles the Blangonga in its appearance and movement, even borrowing some of its attacks. However, notable differences include Rajang's broader muscles, large horns, hairy tail tip and its ability to use electricity-based attacks.

Rajang is extremely violent, unrelenting and ultra-aggresive, and it's intensely territorial as well.

The Rajang's most notable attack is its ability to shoot electricity from its mouth, either as a blast or a beam. They're well known due to their combination of speed, aggression and power. They are also famed for their dramatic Rage Mode, in which much of the fur on their front body rises and becomes gold.

Rajang are found in a very wide range and variety of habitats; like the Volcano, Snowy Mountains and the Gorge. They are rarely seen in the wild due to their lonesome nomadic lifestyle.

For details on older games this monster has appeared in, see Rajang Guides.

For carves and materials from other games, see Rajang Carves 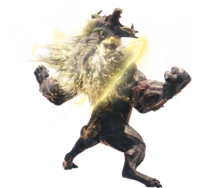 Unlike its normal self, a Furious Rajang is not a Subspecies but rather a revamp Variant of an HR9 Rajang, which in its dormant state appears to be "almost golden as if it were to be locked in its Rage Mode". Its Rage mode shows that its fur stands up and it is visibly electrified by an electric aura. Most videos of this elusive Rajang show its quest location to be at the Volcano and Old Volcano. There is also a special downloadable quest in which hunters must fight two of these Furious Rajangs at the same time in the Great Arena. It is also featured in the last G-rank Training School quest in MHFU.

This variant of Rajang also appears in Monster Hunter 4 with separate Icon, yet it does not have a separate name from an ordinary Rajang. 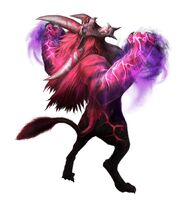 A Variant of Rajang first appearing in Monster Hunter Explore. 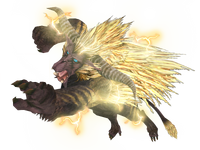 As of Monster Hunter Frontier Season 10, HC Rajang appears with new looks and its new rare Red Aura version with new attacks including one where it raises its arms and creates a large electrical sphere that Rajang will leap into the air and send towards the ground when fully-charged, it slowly descends to the ground and causes a large electrical explosion upon impact. This indirectly references one of the signature moves of Goku's of the Dragon Ball franchise, the Spirit Bomb. Normal HC moves include jumping while spinning forward as far as across the whole area, then landing smashing the ground with its arms creating a wave of rocks horizontally and homing punches with a impact zone of thunder were it follows you while punching, then jumps back hitting anyone behind it with another impact zone of thunder and continues punching following the original target. It should be mentioned that finding a Phantom Rajang really is rare and is a low % to find when choosing to fight a HR100 or G-rank HC Rajang. Normal HC Rajang has blue eyes and very long hair on its back with a gold aura when in rage.