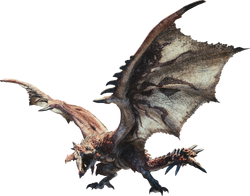 Rathalos are Flying Wyverns introduced that appear in Monster Hunter: World. These terrible wyverns are called the 'Kings of the Skies'. Together with Rathian, they stake wide territories centered around their nests. Rathalos descend on invaders from the sky, attacking with poison claws and breath of fire. Rathalos can be found in the Ancient Forest. Their materials can be used to craft the Rathalos Armor Set.

Like most true flying wyverns, Rathalos possesses the cunning, speed, and strength to fell almost any threat or prey they come across in the wild though they will rarely challenge anything larger than themselves outside of their territory. Rathalos are especially aggressive during mating season. After mating with a Rathian, Rathalos will patrol his territory from the skies, looking for any threats to attack and eliminate from his territory.

Rathalos will often stay airborne while attacking their prey. They can be brought back to the ground with Flash Bombs or Slinger shots. By attacking their wings, they will have a moment of vulnerability before they take flight again.

Rathalos appear as a target in the following quests:

The following is a complete weapon list for Rathalos weapons:

With Pukei-Pukei and Rathian
Add a photo to this gallery

Retrieved from "https://monsterhunter.fandom.com/wiki/Rathalos/Monster_Hunter_World?oldid=785935"
Community content is available under CC-BY-SA unless otherwise noted.