Start a Wiki
watch 01:14
What are Rathalos?
Do you like this video?

"Terrible wyverns called "Kings of the Skies". Along with Rathians, they stake wide territories centered around their nests. Rathalos descend on invaders from the sky, attacking with poison claws and breath of fire."
— MHGU Description

Rathalos are large, bipedal wyverns with a spiny, armored hide covering their body. Their outer shell features much brighter and more vibrant colors than that of their female counterpart, the Rathian. It is primarily bright red, with black markings throughout. Like the Rathian, Rathalos possess a flame sac which is used to produce deadly flaming projectiles from the mouth. The talons upon their feet are highly poisonous and are known to inflict toxic mortal wounds on larger prey. In addition, their long, thick tail features a heavy spiked club at the end. Rathalos' wing membranes feature ornate patterns which are likely used to attract potential mates.

Rathalos are expert flyers, and as such are prone to hunting from the skies. By launching a surprise aerial attack, they can inflict poisonous wounds with their talons or burn prey with flaming projectiles. On the ground, Rathalos remain formidable opponents. Using their powerful legs, they can chase down prey from a distance or inflict blunt-force damage with their clubbed tail. At a close enough range, they are known to use their sharp teeth to bite at foes as well. Some Rathalos are capable of staying in the air and launching a "few" fireballs before landing back to the ground.

Rathalos have been spotted in many kinds of environments, from the temperate Forest and Hills to the extreme heat of the Volcano. As a master of flight, they will travel far and wide, searching for prey from the skies. Rathalos is also the apex predator of the Ancient Forest.

A Deviant of Rathalos first appearing in Monster Hunter Generations. 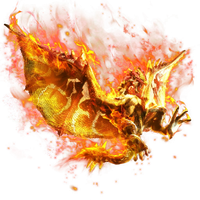 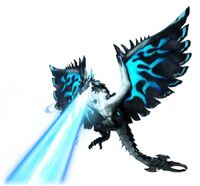 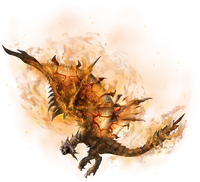 For carves and materials from other games, see Rathalos Carves

Retrieved from "https://monsterhunter.fandom.com/wiki/Rathalos?oldid=813340"
Community content is available under CC-BY-SA unless otherwise noted.