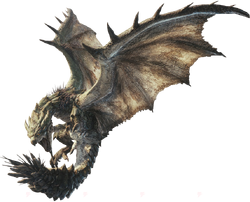 The Rathian appears as a monster in Monster Hunter: World. This wyvern is known as the "Queen of the Land.". This monster is a terrestrial predator and it overpowers its prey with a venomous tail and powerful legs. The Rathian can be found in the Ancient Forest and Wildspire Waste. Their materials can be used to craft the Rathian Armor Set.

The Rathian is one of the most recognizable flying wyverns along with its male counterpart, the Rathalos. Rathians are very territorial, choosing to patrol from the ground while her male counterpart patrols from the sky. It will become very aggressive to potential threats, especially when it is taking care of its young.

The Rathian stands at the top of several food chains in the New World, being the female counterpart of the apex Rathalos. However, some monsters like Anjanath are less inclined to back off against Rathian then they are against Rathalos, which the female wyvern is not unprepared to face, especially when it concerns the safety of her nest. Diablos of the Wildspire Waste is one of the few monsters that could pose a threat to Rathian beside Elder Dragons and invasive monsters.

The Rathian appears as a target in the following quests:

The following is a complete weapon list for Nergigante weapons:

With Rathalos and Pukei-Pukei
Add a photo to this gallery

Retrieved from "https://monsterhunter.fandom.com/wiki/Rathian/Monster_Hunter_World?oldid=777872"
Community content is available under CC-BY-SA unless otherwise noted.