Rathian is a Flying Wyvern introduced in Monster Hunter. 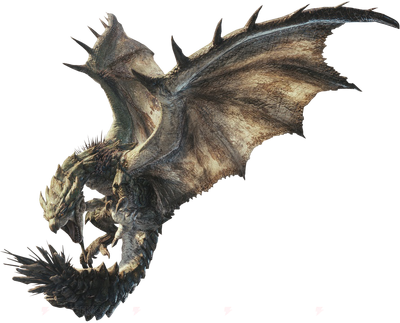 Rathian is a medium-sized true flying wyvern similar in looks to her male counterpart, Rathalos. Her hide is a dull, muted green in contrast to the Rathalos's deep red, and her lower mandible features a long, protruding chin spike. Her upper back and wingtips are covered in a moss-like fur not seen on the Rathalos, and while her clubbed tail lacks bony spikes, it makes up for this with its ability to poison foes upon contact.

Rathian, like her mate, can generate flaming projectiles from her mouth. She is notably more proficient in the use of this weapon however, as she is commonly seen releasing multiple blasts at once. In addition, she is capable of charging up and releasing a more potent fire blast which can ignite a swath of ground in front of her. She can use the poisonous barbs on her tail club to inflict blunt-force, toxic wounds on foes, even if her tail was cut off. Her powerful legs allow her to run at high speeds, making her easily capable of chasing down most prey. Like the Rathalos, her vision is very keen, so Flash Bombs are useful in combat.

Rathian is very territorial, choosing to patrol from ground while her Rathalos mate patrols from the sky. She will become very aggressive to potential threats, especially when in close proximity to her nest and young.

Rathians can survive in almost any territory, but prefers areas with average temperature for nesting. As a result, she is known to be encountered in a large variety of areas such as the Jungle, Sandy Plains, and Primal Forest.

A Deviant of Rathian first appearing in Monster Hunter Generations.

HC Rathian has purple-tinged wing claws and more spikes on her tail, as well as some new behavior; for example, tossing rocks during a tail spin.

A Variant of Rathian that appears in Monster Hunter Online.

A Variant of Rathian first appearing in Monster Hunter Explore.

Retrieved from "https://monsterhunter.fandom.com/wiki/Rathian?oldid=766856"
Community content is available under CC-BY-SA unless otherwise noted.