Rebidiora is a Subspecies of Rukodiora introduced in Monster Hunter Frontier G2. 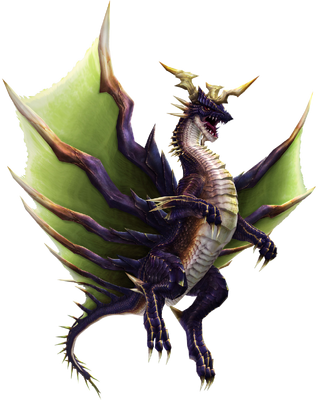 Rebidiora have a body structure similar to Kushala Daora and its relative. Its body is mostly covered with dark purple scales and shells, except its underbelly and underneck which have a white color. Three Yellow thunder-patterned horns are protruding from its head and small spikes are found on its sidehead. Its wings are wide, thunder-patterned (Like its head) and cannot flap like Chameleos' and Fatalis' wings. It has many protruding spikes from its wings to its tail, much like Kushala Daora's wings. Its wings are covered with dark purple shells, and bronze on the tip. Its wing membranes are colored green. Its limbs have 3 claws and protruding yellow thorns. Its tail and head are breakable.

Rebidiora fights almost just like Rukodiora only improved with new attacks including some from HC Kushala Daora. Its magnetic power is always activated. When in rage mode, the black magnetic circle will turn blue. Its wings will also have a Thunder-patterned line along with its wing spikes.

New moves include making free roaming balls of slowly falling magnetic thunder that suck up debris charged with electricity that it then throws in multiple directions and when it crashes into the ground makes a electrical explosion even wider than the monster its self, choosing a hunter by making one of its free roaming thunder ball directly grow above them while its begins to chase with a new fast far reaching claw attack as the free roaming ball collects and throws stuff, a new vortex move where it uses magnetism to hold its self in the air while sucking all hunters close to it to then crash down making a giant explosion of electricity, a very simple wing smash attack where it just slams its wings toward the ground and a very random shield flash where the magnetic circle make a flashed thunder wall that's hinted by sparks from its field.

Rebidiora can currently only be fought in the Interceptor's Base.