The Red Khezu is covered in a fatty, blood-red hide. It has greater control over its extendable neck than the common species and possesses a more potent thunder sac.

The Red Khezu behaves much like an ordinary Khezu; however, it is capable of using a unique neck-thrusting attack. This subspecies, interestingly, is immune to Fire and weak to Water, unlike the Khezu. 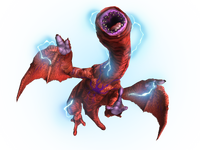 Red Khezu has the same behaviors and HC Khezu with a few changes in behavior and look. Its backbone is very apparent from its skin as it makes it back look lumpy and it is covered in purple veins. One of its special attacks is it will walk around following a target stretching its head waving it around drooling acid that weakens defense as it swings.

Aside from having all White HC Khezu's attacks it gains another new attack such as showing electricity building up on its belly then hopping and releasing thunder balls that go in all all directions that even climb walls that cause paralysis.

Another thing unique is at any rank HC Red Khezu will run at speed comparable to a Tigrex charge on a roof while dripping acid.

It is undoubtedly one of the most aggressive of blind Flying Wyverns.

Retrieved from "https://monsterhunter.fandom.com/wiki/Red_Khezu?oldid=863465"
Community content is available under CC-BY-SA unless otherwise noted.