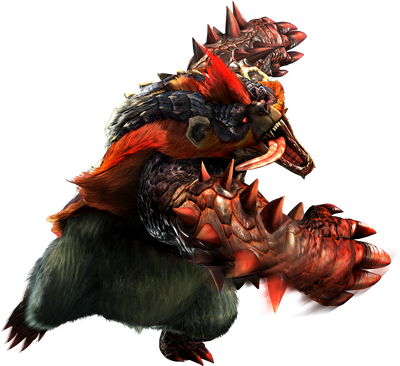 Redhelm Arzuros are among the largest of their species. Their forearms, feet, eyes, and upper body-fur are blood-red in color. Aside from those sections, their bodies are primarily blue, with their carapace and lower body-fur being a greenish blue. A pronounced strip of fur atop their head gives the impression of a mohawk.

Redhelm Arzuros use their increased size and strength to their advantage during battle. They are known to leap high into the air, landing with incredible force in an attempt to crush an opponent. They also use their larger claws and more powerful arms to rip through the ground and hurl debris through the air, and have even been observed sending entire schools of fish flying by performing this action in watery environments.

Redhelm Arzuros inhabit the same environments as ordinary Arzuros, but are significantly less common. On extremely rare occasions, they have been found at the Tower as well.

Retrieved from "https://monsterhunter.fandom.com/wiki/Redhelm_Arzuros?oldid=829552"
Community content is available under CC-BY-SA unless otherwise noted.