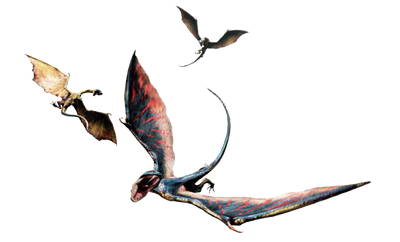 They attack by spitting poison and use a variety of melee attacks, such as flicks of the tail and flying tackles. These attacks are not extremely dangerous but offer great annoyance if the hunter is engaged with a larger, more attention-demanding foe. They mainly hover in the air, attacking from above and hence are liable to affect camera movement, which is tantamount to distraction from large monsters' attacks.

They have been spotted in almost every area, but they mainly live in the Volcano and the Swamp. They travel in groups and live in damp, water-rich areas such as the Tower, Jungles, Swamp, and Gorge. However Remobra are known to migrate to areas of extreme heat, namely Volcanoes and Deserts, making them widely adapted to any subtropical environment.


Retrieved from "https://monsterhunter.fandom.com/wiki/Remobra?oldid=809126"
Community content is available under CC-BY-SA unless otherwise noted.