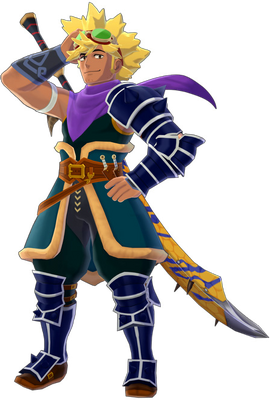 Reverto is a lazy hunter that doesn't do much until it is time to hunt. When hunting, his real skills as a hunter can be witnessed by all. He also has a high fear of bugs, as seem as he refuses to go on missions that involve bugs.

Reverto was born in Albarax, but eventually moved in Gildegaran where he became friends with Simone at a younger age. When still a novice Hunter under the lessons of a powerful hunter, he attempted to hunt a Tigrex and failed. When he thought it was the end for him, his teacher's teaching saved him when he slowly became one with nature and learned how he was no different from the Tigrex. The Tigrex then lied beside him and spared his life. He eventually grew up to become a hunter that is recognized by the Hunter's Guild for his skills in combat. Now he is helping his guild figure out a mystery about berserk monsters with the help of the Player Character. While on their journey, he teaches the young Rider the values of being a hunter and how, in many ways, they are similar to Riders.

Reverto is a well built man with a tan skin, blond spiky hair, and brown eyes. He wears a special version of the Hunter's Armor and uses the Tigrine Edge

Retrieved from "https://monsterhunter.fandom.com/wiki/Reverto?oldid=800480"
Community content is available under CC-BY-SA unless otherwise noted.