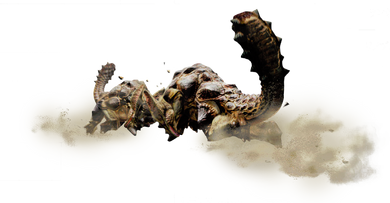 Rhenoplos is a quadrupedal, Ceratopsian-like monster with an armored body. Its face features a small nose horn and is surrounded by a frill.

Similar to the Bullfango, Rhenoplos are highly aggressive and tend to charge any hunters they may hear or smell, as their vision is lacking.They do resemble the protoceratops.

Retrieved from "https://monsterhunter.fandom.com/wiki/Rhenoplos?oldid=857082"
Community content is available under CC-BY-SA unless otherwise noted.