The Royal Ludroth is a Leviathan introduced in Monster Hunter 3. 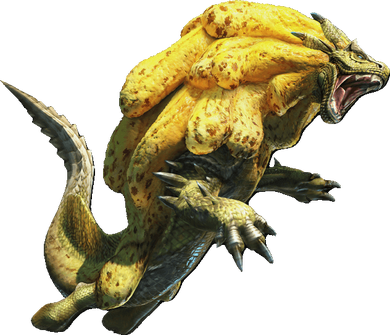 It has a crown-like crest composed of several finger-like appendages tipped with black spikes as well as a large, spongey yellow mane. The Royal Ludroth has a long, serpentine body with four squat limbs. Its hind pair of legs are shaped like paddles for swimming, and its foremost pair are more muscular, tipped with developed digits ending in long black claws. Its jaws are lined with shear-like plates in the place of teeth.

Using its large, absorbent mane, Royal Ludroth can take on gallons of water for use in its many water-based defences. It can produce mucus-based globules that can be spewed at foes, and can force water out of the mane at high speeds, blasting back nearby enemies. They are adept swimmers, and are formidable hunters in an aquatic environment.

As the alpha male, Royal Ludroth will usually roam around with a harem of females in tow. It is an aggressive creature, and will lash out at anything that threatens it or its clan.

Retrieved from "https://monsterhunter.fandom.com/wiki/Royal_Ludroth?oldid=831098"
Community content is available under CC-BY-SA unless otherwise noted.