It shares the same general build as other Elder Dragons. It has large, gold colored horns that can be broken three times, golden wings, grey scales, and spines along its tail. A dark circle, along with boulders and other floating debris surrounds Rukodiora.

Rukodiora inflicts a status effect that enables it to magnetically push and pull hunters to its will. When attacking, Rukodiora uses the magnetically controlled levitating debris surrounding it for both offense and defense. It also swipes at the hunter with its claws, flies into the air before swooping down, and utilizes a powerful Dragon-Element magnetic sweeping beam that sucks hunters into it and gives the Magnet status even if they are just next to it. It can inflict the Magnet status through contact with released dust during its attacks or when beginning its enrage.

Rukodiora uses its magnetic manipulation abilities to hurl objects at hunters, as well as throw around the hunters themselves. It is highly aggressive and will employ the use of a variety of weapons to dispatch an attacker.

Rukodiora are usually found living in arid areas like the Desert and White Lake and are also infamous for attacking the Interceptor's Base quite often. 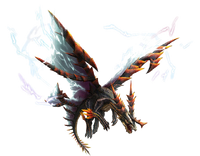