Rust Duramboros is a Brute Wyvern and a Subspecies of Duramboros introduced in Monster Hunter 3 Ultimate. 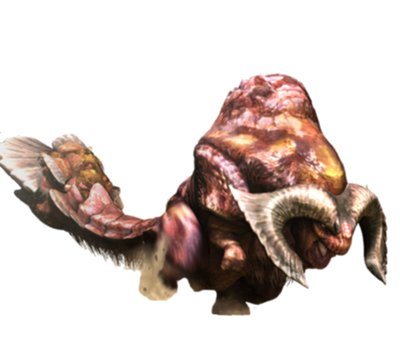 The environment in which it lives has left its body covered in sand and grit, giving its hide a copper-pink tone, on top of the natively brown hide. Although similar to ordinary Duramboros in many ways, the Rust Duramboros has developed a wider, more axe-like tail club rather than the spherical, hammer-like club of a common Duramboros.

Because it is not exposed to coverings of moss and algae, the body of a fully grown Rust Duramboros retains its juvenile appearance to a great degree.

Rust Duramboros has adapted to survive in the harsh conditions of the Sandy Plains, an unusual area for a lumbering beast with such size. However with their large back humps and thick tails capable of storing fat reserves and nutrients these herbivores are capable of going months without food or water.

Retrieved from "https://monsterhunter.fandom.com/wiki/Rust_Duramboros?oldid=863436"
Community content is available under CC-BY-SA unless otherwise noted.