Defense Down (MHF-GG HC only)

Rusted Kushala Daora is an Elder Dragon whose characteristic metallic skin is, as its name implies, wholly rusted.

Rusted Kushala Daora has a much more aggressive behavior than that of it's normal counterpart. It tends to use more physical attacks such as biting and charges to attack hunters, and stay on the ground more often. Its roar and screeches are slightly different from Kushala Daora's.

Rusted Kushala Daora can be found in the Polar Field. Additionally, it tends to attack cities and military bases on its way leading to hunts in the Town/Battlequarters and the Interceptor's Base.

For carves and materials from other games, see Rusted Kushala Daora Carves 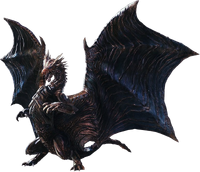 Retrieved from "https://monsterhunter.fandom.com/wiki/Rusted_Kushala_Daora?oldid=863423"
Community content is available under CC-BY-SA unless otherwise noted.