The Second Fleet Master lives for the craft. He says even losing his second eye wouldn't keep him from work. He encourages hunters to upgrade their gear and offers tips on how to best use their equipment.

Coming ten years after the First Fleet, he led the Second Fleet to the New World to help improve Astera. While most of the hunters from the First and Second Fleets have now returned to the Old World, the technicians are still hard at work. 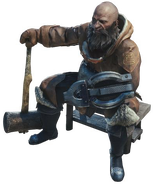 Retrieved from "https://monsterhunter.fandom.com/wiki/Second_Fleet_Master?oldid=810830"
Community content is available under CC-BY-SA unless otherwise noted.