Blastblight (On other monsters only)

Seething Bazelgeuse has a more metallic blue coloration to its body when in its normal state. Its normal state is like Bazelgeuse's heated state. It can power up even further, with its head and tail glowing white hot, then beyond that, glowing a searing purple-white.

Seething Bazelgeuse has further developed its explosive scales to a devastating degree. In its first powered-up state it drops explosive scales as usual, though these scales can be flung with more attacks at a wide range. In its second powered-up state, the scales glow purple-hot before exploding in a huge blast radius. These scales will stick to surfaces, including walls. When all its scales are glowing purple, Seething Bazelgeuse will unleash its most powerful move: soaring into the sky while scattering scales in a wide area, then crashing back down with a massive explosion. This attack uses up all its explosive scales, making it revert back to its regular state. Seething Bazelgeuse has the ability to fling scales just by swinging it's head or tail removing it's usual need to do bombing runs. Not only do they fly more wildly but because they are always heated up it has no need of needing to detonate them with it's body.

The following is a complete weapon list for Seething Bazelgeuse weapons: 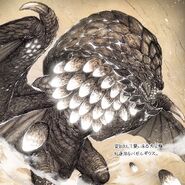