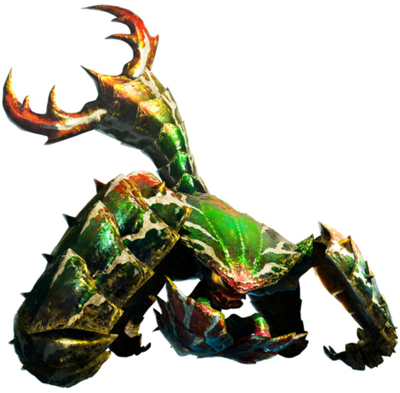 The Seltas Queen is a very large, beetle-like Neopteron with an armor-like exoskeleton covering its body. She is primarily a lustrous green color, but also features beige stripes and orange spines. She has six limbs, four of which make contact with the ground, the other two being used for digging and grasping prey. In addition, she has a long, segmented tail with a large pincer-like structure at the end. Seltas Queen is the female counterpart to Seltas, although she is physically very different.

Seltas Queen can use her large, heavy limbs or weaponized tail to incapacitate prey. She also makes use of the Water element, frequently shooting large water globs in a rapid-fire fashion.

As a female, Seltas Queen is capable of casting a pheromone to attract Seltas when in need; in her case, as often as possible. Whenever a Seltas dies, another one will quickly come to her aid. These pheromones can also inflict stench to the hunter.

Since she is mostly seen together with Seltas, they have many attacks where the two 'merge' together, with Seltas being on top of Seltas Queen. Both of them may perform combined attacks or even chain attack combos together. One of the most bizarre attacks has Seltas lifting his partner and literally throwing her down in an attempt to crush the hunter. Seltas can also use his wings as a sort of "propeller", in order to give Seltas Queen a boost during her charges. Likewise, the Seltas will use its horn as the Queen charges.

Seltas Queen exhibits a strong symbiosis with her male counterpart, Seltas. As she is incapable of flight, she is always accompanied by a male that is capable of lifting her and transporting her elsewhere. The two also often rely on each other for protection, especially when the Queen sleeps.

However, she is known to be extremely violent towards her male counterpart, such as forcefully grabbing him or even outright killing and devouring him when in need of energy.

Seltas Queen lives in the Ancestral Steppe, Heaven's Mount, Primal Forest, Everwood and hunted by Felyne's in the Forest and Hills. She usually lives alongside her male counterpart, Seltas, as they can breed and provide each other with protection and transportation.

The name Seltas Queen was chosen to evoke a fierce queen charging into battle with her loyal subjects.

Retrieved from "https://monsterhunter.fandom.com/wiki/Seltas_Queen?oldid=795157"
Community content is available under CC-BY-SA unless otherwise noted.