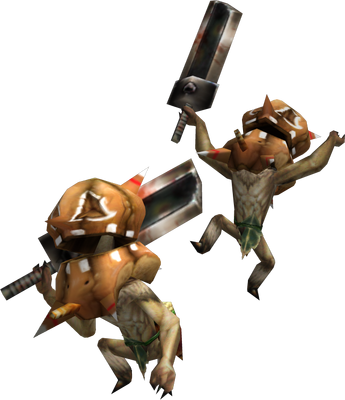 Shakalaka are small, humanoid creatures with green skin. They wear a mask over their heads at all times, so their true faces are unknown.

Shakalaka should not be underestimated; they can easily take out an unsuspecting hunter with exceedingly quick attacks and inflictions of poison. They are rather clumsy when they attack, but may also be armed with Bounce Bombs and Sleep Bombs. They are known to sometimes drop fake, explosive treasure in the form of a "shiny". Like the Felyne and Melynx, they will dig underground when defeated, leaving behind their masks, which can then be carved. Their intelligence allows them to live in a multitude of environments.

Shakalaka are highly social creatures that live in large tribes, working under the leadership of the King Shakalaka. They have rarely been known to enter human society.

Shakalaka are known to inhabit a wide variety of environments. A Shakalaka settlement has been discovered in the Great Forest.

Retrieved from "https://monsterhunter.fandom.com/wiki/Shakalaka?oldid=850633"
Community content is available under CC-BY-SA unless otherwise noted.