Shamos are a monster first introduced in Monster Hunter: World. These small nocturnal monsters are particularly vulnerable to Tzitzi-Ya-Ku's blinding flash, but have been known to gang up on enemies. Shamos can be seen inhabiting dark caves and overhangs in the Coral Highlands during the day, only venturing out to hunt at night.

Shamos has a wolf-like body shape with huge orange eyes. Though its body shape is akin to a wolf, Shamos' appearance is very similar to fish. Its face is covered in red scales while the rest of its body is covered in grayish-white splotches. Its limbs are navy blue in color. Shamos also has a small fin on its back like a fish.

Shamos has unusually large eyes that allow it to see in pure darkness. Shamos are aggressive hunters that will attack in small packs. They will often group together in order to scare off potential predators such as Tzitzi-Ya-Ku. They are blinded easily and will retreat most of the time when they are exposed to light sources, or if a hunter throws fire in their direction. Shamos dislike Tzitzi-Ya-Ku in particular due to its blinding flash.[1] 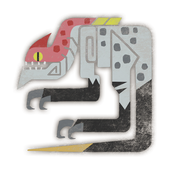