Identifiable by their grey skin, towering legs and the gigantic green-yellow balls of acid that they generate and hurl from the rear of their bodies. Shen Gaoren are so large they use a Lao-Shan Lung skull for protection. Their colossal size helps them to defeat most creatures. The diet of Shen Gaoren is unknown; however, it is likely to be omnivorous, like most real-life crabs.

Unlike the Lao-Shan Lung, Shen Gaoren will occasionally pause to attack the hunter directly, trying to slam one of its huge claws down upon an annoying hunter. It may do this twice or even 3 times before proceeding along its path through the valley (However, it only does this in the Town area while traveling through the first few zones).

Shen Gaorens are relatively passive by nature. They move about without noticing hunters; however, when enraged, it may attempt to attack hunters by using their huge sturdy claws or by moving their legs and pincers wildly.

Shen Gaoren appear in the mountain ranges not far from Minegarde. 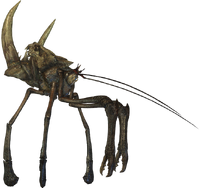 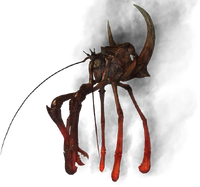 Retrieved from "https://monsterhunter.fandom.com/wiki/Shen_Gaoren?oldid=863416"
Community content is available under CC-BY-SA unless otherwise noted.