Shrouded Nerscylla are Temnocerans and a Subspecies of Nerscylla introduced in Monster Hunter 4 Ultimate. It is known to inhabit desert regions and it can be encountered at G-Rank. 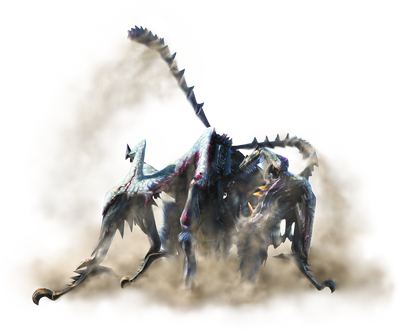 It is very similar to its common counterpart; however, it wears a Khezu skin rather than a Gypceros skin. Its back spikes are also bright-yellow in color, indicating their paralysis attribute.

Its different ability likely comes from its diet of the Khezu, just like how the common Nerscylla can secrete poison due to feeding on Gypceros.

Shrouded Nerscylla can inflict paralysis with its back spikes and claws, and seems to demonstrate a mastery of web traversal, able to change direction mid-air by swinging on a different thread.

Shrouded Nerscylla can be found within the Dunes and the Everwood.

The prefix Shrouded was chosen because it describes the way that the monster wears a hide as a hood, and at the same time associates it with death and the grim reaper.

Retrieved from "https://monsterhunter.fandom.com/wiki/Shrouded_Nerscylla?oldid=857657"
Community content is available under CC-BY-SA unless otherwise noted.