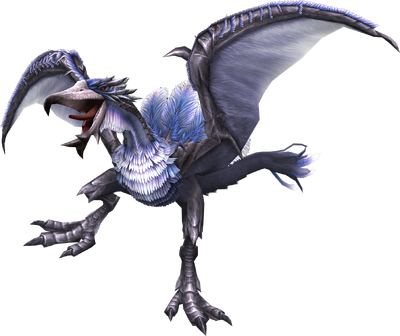 This subspecies is covered in cobalt and silver plumage. It has extremely powerful legs and a highly potent sleep sac. Its eyes are a deep red.

Silver Hypnocatrice is capable of much more powerful kicks and can utilize its sleep sac to a more advanced degree than the common species. It can cause large tremors by landing from flight or jumping around, causing prolonged staggering it can exploit to kick hunters.

Retrieved from "https://monsterhunter.fandom.com/wiki/Silver_Hypnocatrice?oldid=818322"
Community content is available under CC-BY-SA unless otherwise noted.