Collapsing to the ground 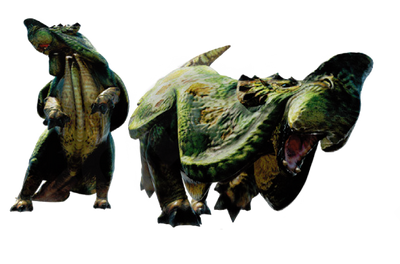 Slagtoth have green, saggy hides covering most of their body, most notably drooping near the sides of the head and along their flanks. They have pale yellow underbellies and black crests and noses.

Slagtoth are extremely territorial; the males will attack both Hunters and Wyverns. They attack Hunters by ramming with the bone lump on their snouts and body-slamming. When unprovoked however, these docile creatures have often been observed to rest in the waters of the Flooded Forest.

They are usually found near water, probably because their floppy, frog-like hides require moisture.

Retrieved from "https://monsterhunter.fandom.com/wiki/Slagtoth?oldid=818419"
Community content is available under CC-BY-SA unless otherwise noted.