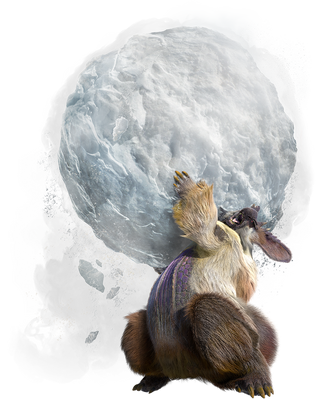 Snowbaron Lagombi have darker colored fur on the lower half of their bodies and along their backs, becoming a brown color. Their plastron bellies are purple in color. The armored sections on their forearms are no longer visible due to their fur growing longer there. Their ears have oval tips as opposed to the trapezoidal tips of regular Lagombi.

Snowbaron Lagombi are much stronger than ordinary Lagombi. This is best evidenced in their ability to lift mounds of snow larger than their own bodies and hurl them at attackers. They can also slide on their bellies with greater speed, power, and control, and kick up enough snow and ice while doing so to freeze nearby creatures solid.

Snowbaron Lagombi are found in areas typical of regular Lagombi, though they are much less commonly sighted. On certain rare occasions, they have also been seen in the Polar Field.

Retrieved from "https://monsterhunter.fandom.com/wiki/Snowbaron_Lagombi?oldid=849898"
Community content is available under CC-BY-SA unless otherwise noted.