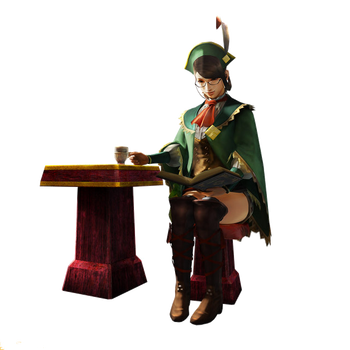 She is considered to be an oddball among most Guild Receptionists. Sophia is very polite and has a fascination with some pretty odd monsters such as Gravios, Gore Magala, Daimyo Hermitaur, Rajang, Gigginox, and Seregios. The main monster she loves the most is Brachydios. She is also said to do some crazy things if she gets drunk, according to the Caravaneer.

Unlike most other Guild Receptionists, Sophia is known to travel from place to place for her job and even secretly watch hunters hunt down monsters while taking notes. Thus far, she has been seen working in Val Habar, Harth, Cheeko Sands, Cathar, Dundorma, and Bherna. Sophia has even attempted to join more elite researching teams in some cases, leading to her going bankrupt. In her spare time, she is known doodle monsters and make dolls of them occasionally.

Sophia wears a green Lecturer's Uniform. She wears glasses and holds a notebook containing doodles of monsters, along with information on said monsters.

Retrieved from "https://monsterhunter.fandom.com/wiki/Sophia?oldid=749177"
Community content is available under CC-BY-SA unless otherwise noted.