Square Enix Holdings Co., Ltd. (株式会社スクウェア・エニックス・ホールディングス Kabushiki-gaisha Sukuwea Enikkusu Hōrudingusu) is a Japanese video game developer, publisher, and distribution company that is best known for its role-playing video game franchises, which include the Final Fantasy series, the Dragon Quest series, and the Kingdom Hearts action RPG series. Its headquarters are located in the Shinjuku Eastside Square Building in Shinjuku, Tokyo.

The original Square Enix was formed as the result of a merger between Square and Enix. The merger occurred on April 1, 2003 with Enix as the surviving company. Each share of Square's common stock was exchanged for 0.85 shares of Enix's common stock. At the time, 80% of Square Enix staff were made up of former Square Co. employees. As part of the merger, former Square president Yoichi Wada was appointed president of the new corporation, while former Enix president Keiji Honda became its vice president. The founder of Enix, Yasuhiro Fukushima, currently serves as the honorary chairman and largest shareholder of the corporation.

The company also owns Taito Corporation, best known for arcade games such as Space Invaders and Bubble Bobble, and former game publisher Eidos Interactive, which has been absorbed into Square Enix Europe. Square Enix now publishes all of Eidos's IPs and runs Eidos's development studios. Eidos was most well known for publishing the Tomb Raider, Hitman, Deus Ex, Legacy of Kain, and Thief series of games. 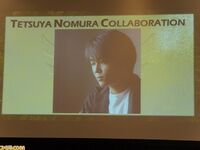 Square Enix made a collaboration with Monster Hunter.

The collaboration was announced on October 12, 2014. The collaboration is exclusive to Monster Hunter 4 Ultimate and is not present in Monster Hunter 4G. It features the following Palico Armor Set and Palico Weapon fashioned after Final Fantasy Series' Warrior of Light, an Armor Set fashioned after Diabolos and Bahamut as well as a Longsword all designed by Tetsuya Nomura himself:

In addition to that, a Play-Arts Kai figure will be made for Tetsuya Nomura's Hunter design, complete with the Weapon. 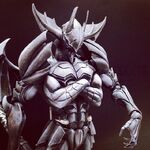