Steel Uragaan is a Brute Wyvern and a Subspecies of Uragaan introduced in Monster Hunter Portable 3rd. 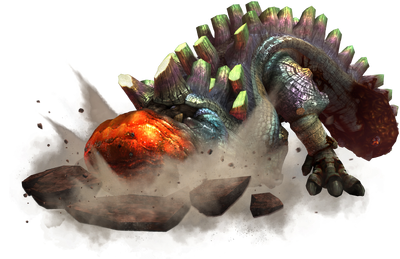 This variant appears to have a hide of a deep metallic blue, rather than the golden hide of the common species. It is speculated that this altered coloration is due to the monster feeding on different types of ores.

It can inflict the Soiled status using a sulfuric yellow gas and the rocks it tosses will burn for a few seconds after being thrown, inflicting additional fire damage if they hit a hunter before they settle on the ground. These will also release soiling gas when exploded.

The Steel Uragaan does not live in a completely different habitat to its counterpart. For most of its life it remains in the Volcano, and much like the regular Uragaan, it stays there because of the abundant source of ore. Surprisingly, Steel Uragaan can sometimes be found inhabiting the temperate Deserted Island.

Retrieved from "https://monsterhunter.fandom.com/wiki/Steel_Uragaan?oldid=849959"
Community content is available under CC-BY-SA unless otherwise noted.