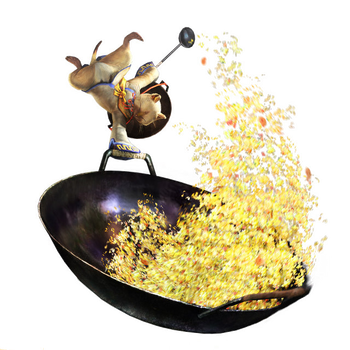 The Street Cook is a workaholic Lynian. This chef has masterful cooking skills that it has gained in recent years.

During its early days, the Street Cook was just a general cook for Val Habar until one day, this future chef was stopped by a Jaggi pack. This pack was slain by an unnamed hunter. This event led to the Caravaneer inviting the Steet Cook to his caravan as a member, which it gladly accepted becoming a member of.

It wears Chinese style chef coat with a pan on its back.

Retrieved from "https://monsterhunter.fandom.com/wiki/Street_Cook?oldid=749179"
Community content is available under CC-BY-SA unless otherwise noted.